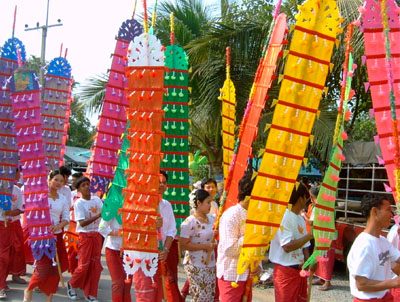 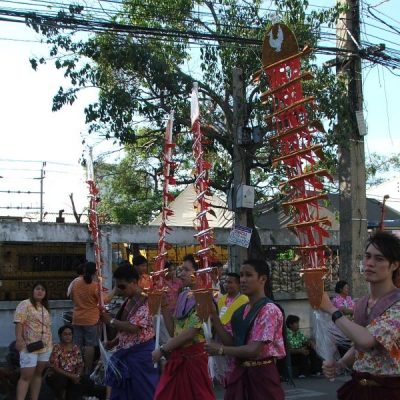 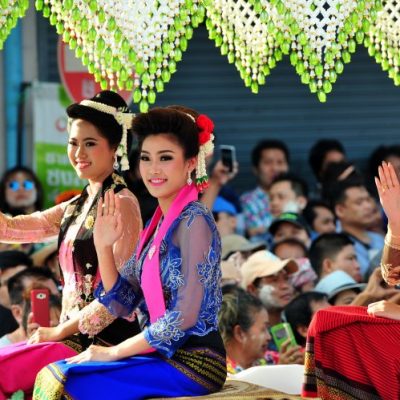 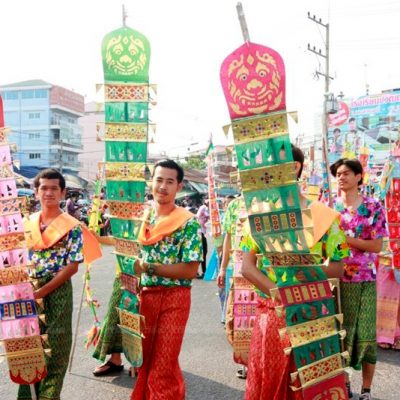 This tradition originally belonged to the Mon people who settled down near Pimpawas Temple (South) in the area of the Bangpakong district. The parade takes place during the annual Songkran festival on 12-14 April. There is an interesting local handicraft tradition in the centipede flag parade, which is the making of paper flags. This tradition has been passed on from the parent generations; the flag makers need to know the flag’s details extremely well: for example, one centipede has nine breasts and 14 sections each; the centipede’s breasts come in pairs, and the female centipedes have only one mouth while the males have two mouths. When finished, the makers will hang flour, a comb, a mirror, a tuft of hair, and a handkerchief from the centipedes’ mouths. In the offering of the centipede flags, two to three centipedes are offered each time. The centipede flag parade is usually on land rather than boat. When arriving at the temple, the villagers will tie the flags on the poles in the hall for a religious ceremony. After that, the monks will encircle the flags using a holy thread, then the flag offering ceremony will begin with the citation of the Triple Gem’s benevolence, followed by watering the Buddha’s image and the monks. After that, the villagers will untie the centipede flags and raise them to the top of the Phoenix pole; it is believed that every time the flag moves because of the strong wind, the ancestors who’ve passed will be able to go to heaven. The centipede flag parade tradition is an expression of the believers in the afterlife and the gratitude towards their ancestors, and religion is the link between the beliefs. It is also an activity to unite people in the community as well. Ritual Ceremony The centipede flags were originally made of paper and later changed to fabric. Nowadays, they use a rope for tying, pieces of bamboo in sections, and a mat instead of fabric or paper as the body. Both ends of the bamboo are decorated with spoons and paper tassels instead of the legs. The head and tail are tied to the wooden frame over colourful papers. The length of the centipede depends on the makers. After that, the parade will be on its way to the temple, then the religious ceremony previously mentioned begins until the flag is on the top of the pole.