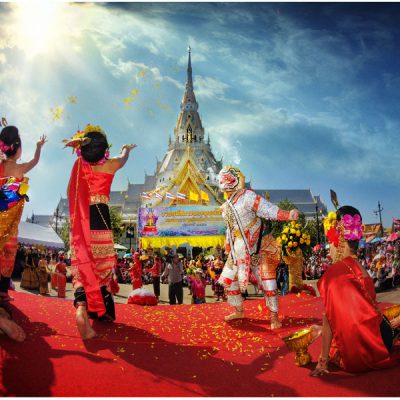 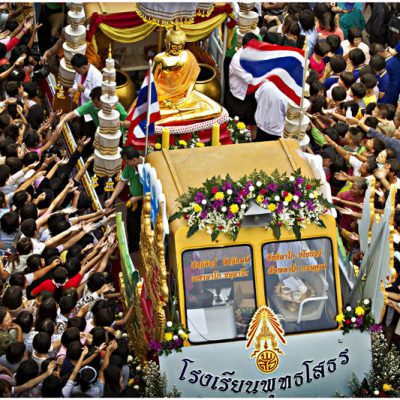 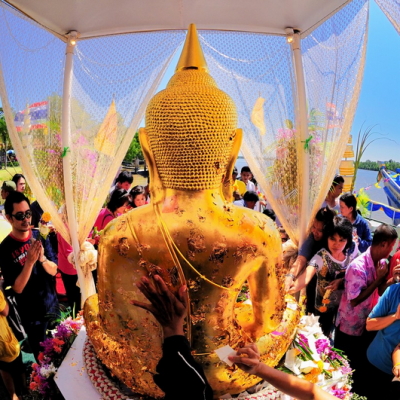 This event’s objective is to promote the local traditions of the community. Within the event, there is an opening ceremony and a beautiful parade by boat of the Father’s image. People pay respects to the image together and make a wish to the Father for the good fortune of oneself and their family. Moreover, there are exhibitions, cheap products from companies and shops, concerts of famous singers, and many more. The annual worship festival of Sothon, the venerable father, takes place three times a year:

Importance Sothon, the venerable father, is a Buddha’s image that is believed to be holy. Many people from inside and outside the country come every day to pay respect, especially on special occasions and holidays. Ritual Ceremony The festival starts in the middle of the 5th month and takes place forthreedays and threenights – from the 14th night of thewaxing moon to the 1st night of the waning moon, of the 5th month. It is held on the day that is believed to be when the image of the father was invited from the river and placed at Sothon Worawihan Temple. The festival in the middle of the 12th month has been carried out for hundreds of years, starting 1891. During that time, the villagers were facing famine, drought, cholera, and smallpox, causing many people and animals to die. Out of desperation, the villagers prayed to the father’s image to make the chaos go away; they put gold sheets on the image, arranged entertainments, and more. It is said that because of the father’s holiness, rain fell making the drought and diseases go away. The villagers then organized this festival to fulfill their vow to the father. Originally, the festival took place for three days – from the 14-15th nights of thewaxing moon to the 1st night of the waning moon, of the12th month. Later in 1951, they organized two more days - 12-13th nights of thewaxing moonof the same month. It became the traditional practice that has been carried on until today. On the 14th day of the waxing moon, there is a parade on land, and on the full moon, there is a parade on boats. On the last day(1st night of the waning moon), people walk around the hall of the temple with candles in their hands and sprinkle water on the Buddha’s image. The festival on Chinese New Year takes place over five days and five nights, according to the lunar calendar, which is from the 1st night of thewaxing moon – New Year’s Day to the 5th night of the waxing moon. If comparing to Thai months, it is around the 2nd or 3rd month.