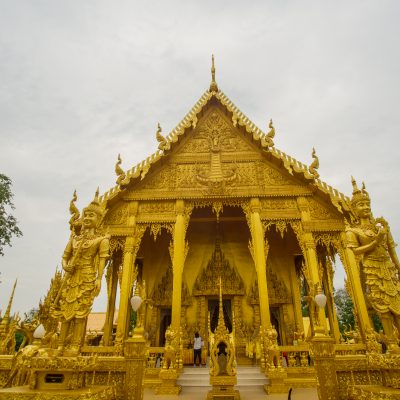 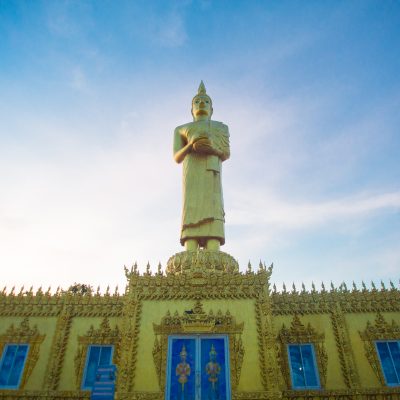 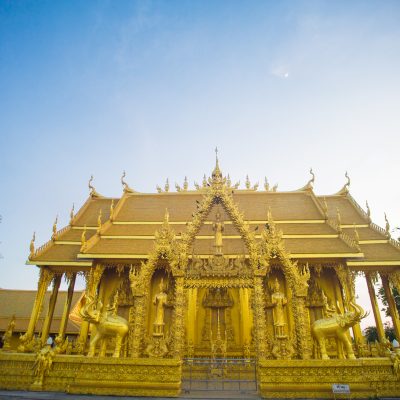 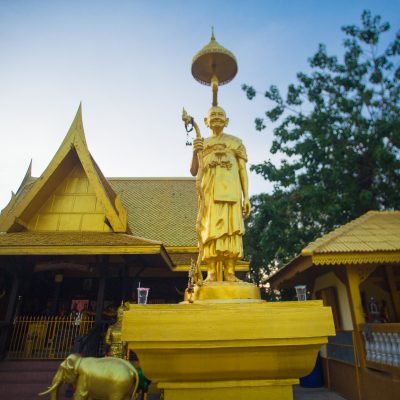 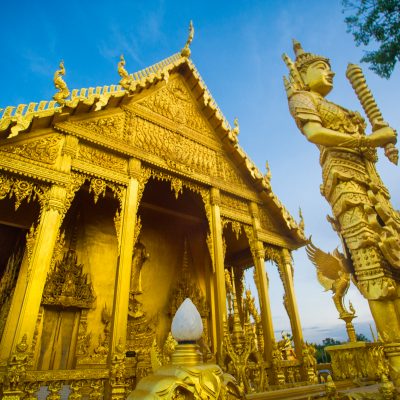 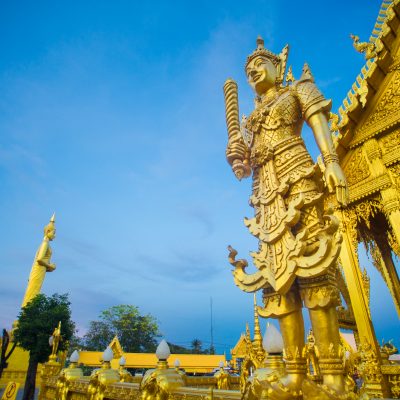 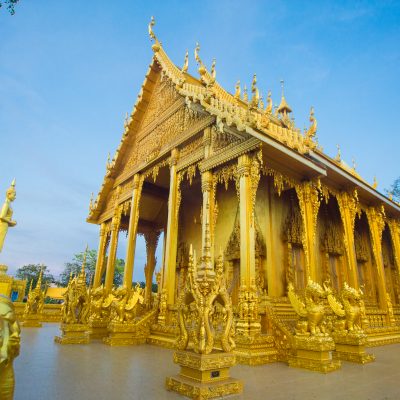 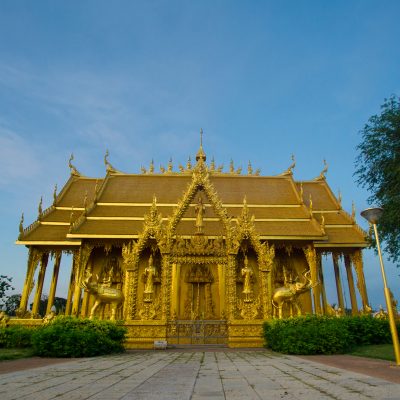 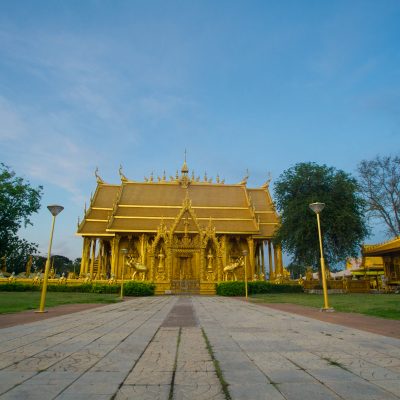 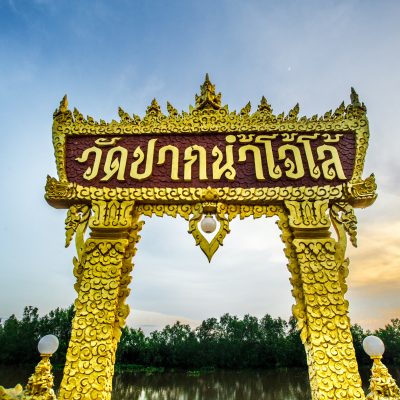 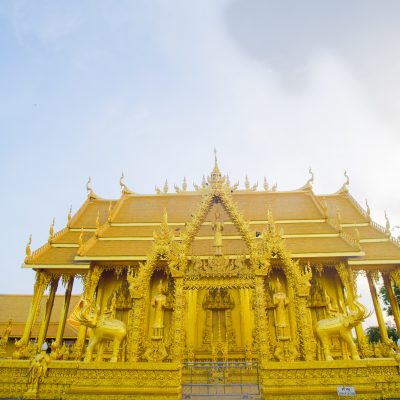 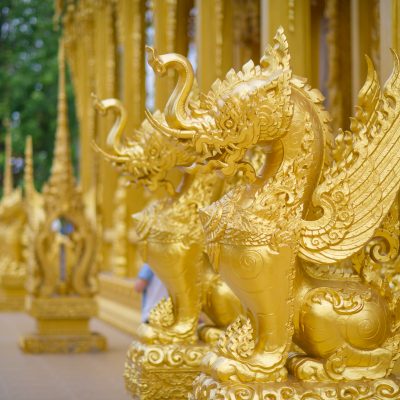 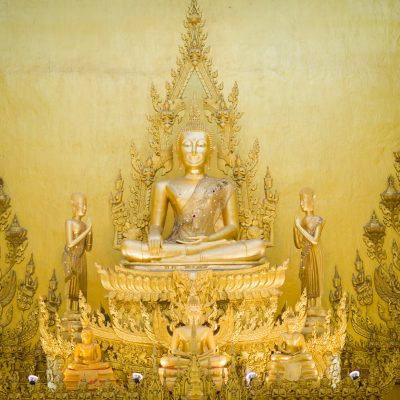 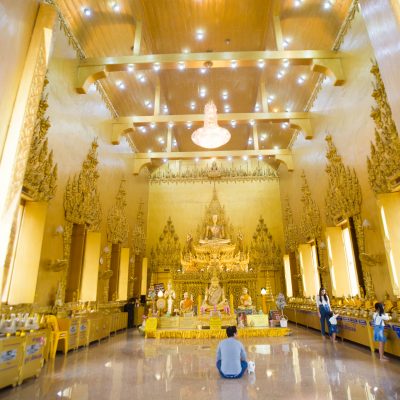 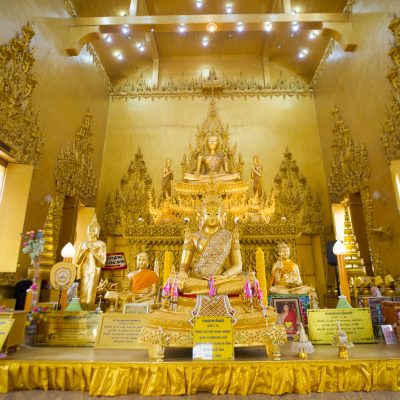 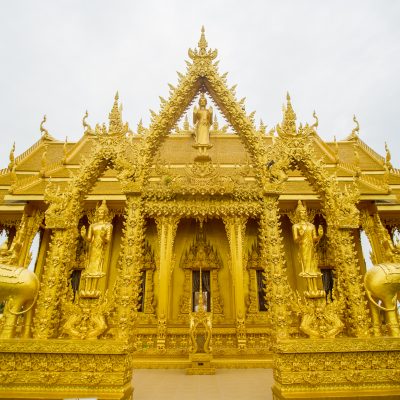 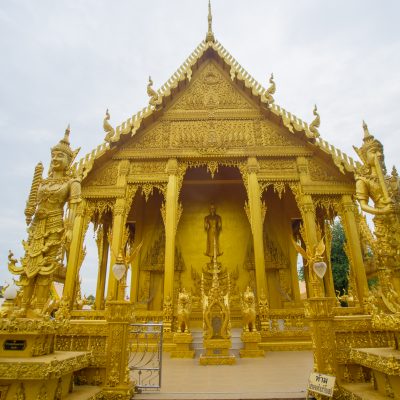 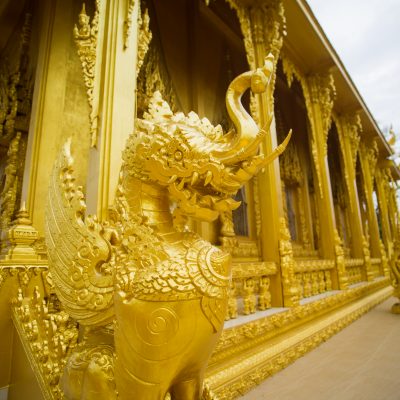 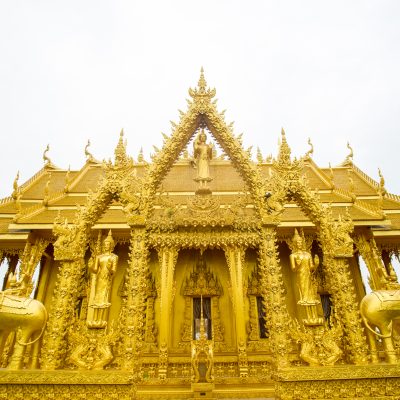 Wat Pak Nam Jolo was a monastery dated back to the end of Ayutthaya period. At its frontage, a canal flows through the Bang Pakong river. It was built around 200 years ago. This area was once the Burmese military bases both army and navy. They battled with and were defeated by the army of King Taksin the Great. The King thus built a pagoda at this place to commemorate the victory. The pagoda was located at the memorial of King Taksin the Great. However, it was destroyed by water erosion since 1948. The Fine Arts Department rebuilt it at the same place around the chapel starting from the golden chapel pillar. The base of each pole is a standing giant sculpture, 2 giants are carved for all pillars at the corner. Though, these are molding, the patterns are quite detailed. All 8 Sema leaves are decorated on the incredibly beautiful arch. Staircases are a pair of Kocha Puksa distinctive to Wat Pak Nam Jolo unlike other places that often use different animals such as Naga. Or on the cement balcony of the chapel, 4 Bearing Altar Hanumans are molded for each slot. The wall at rear of the chapel is the Stopping the Rainstorm attitude of the Buddha image that enshrined in the middle between the 2 doors. Three slots in front of the chapel are enshrined the Buddha images on the base rather than building them on the wall. The patterns of the base of the Buddha images are beautifully detailed. At the bottom are 9 images of Theppanom. At the middle are 3 images of Theppanom on 3-head Naga turning their back to each other. The upper floor is also very beautiful. Staircases to the chapel are Kocha Puksa figures on both sides with an overall body of a bird, head of an elephant, the lower body part of a swan, and main body and arms of a Garuda. Inside the chapel of Wat Pak Nam Jolo, the presiding Buddha statue is in Subduing Mara attitude. It is effortless to describe the beauty of the chapel. Carved patterns or mold are used to make interior design of the chapel all in golden color just as the outside instead of wall painting. This is a unique style of Wat Pak Nam Jolo and it is a very beautiful feature. Candleholder and incense burner inside probably need to be moved outside otherwise smoke may cover the golden ceiling. In addition, there is a room under the base of the presiding Buddha statue, which leads the way to the rear. It is believed that persons who walk through the passage under the presiding Buddha statue will be lucky. The temple offers a set for merit making, i.e. incense, candle, cone, and crystal balls on the tray with prayer for forgiveness from the Triple Gems. The following is an important merit making, unlike other temples that offer 108 food offerings per individual’s faith, here food offerings are made to the 28 Lord Buddha each of which, the name is attached to the base. Undoubtedly, many people are unaware that there are 28 Lord Buddha, so they will learn it here from Wat Pak Nam.

Private car from Chachoengsao city, use Route 304 Chachoengsao-Phanom Sarakham, make a left turn at the 17th km intersection to Bang Khla District (3121)-straight ahead passing Bang Khla Floating Market-Tha Lat Bridge to Wanapudhi Road for 1 km., the temple is on the left.

The temple is decorated with beautiful art and has a long history since the time of King Taksin. Wat Paknam The temple is famous for the beauty of Ubon Ratchathani. The fine art of the artist has drawn beautifully decorated designs.